Sorry for not updating this blog for quite a long time ^^;

So okay, I want to tell you that a week ago(?) I’ve released the android version of dUpLicity~Beyond the Lies~. 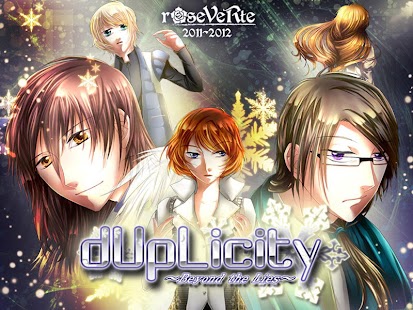 I use the ren’py porting function to port this one so… if you found any crash, I’m sorry that it might be caused by the engine which I can’t fix it myself ^^;

And then… for East Tower – Kurenai. Let’s see… what kind of information I can provide.

1. This game might be the longest within the East Tower series. I’ve been thinking to split this into two, but then it seems that I can’t do it at iOS (I will need to use In App purchase but then the engine I use hasn’t supported it yet)

2. There will be more endings. Not only, love, normal, and bad (like when you make a false selection), but also 4 type of true endings… WHAT 4??? Yes. They are all true ending, but it will differ based on your choice, since your choice will determine the Main Character’s type like what I said before. Seme or Uke and Female or…

3. Male! So yes, I’m considering to make BL ending at this route! If you worry about the MC doing sth like sex surgery in reality, don’t worry it won’t be happened. The condition, situation within this route is different. *I can’t say it in detail because it would be a huge spoiler!!

4. You might know what happened after Akio, Takashi and Kuon route. Errmm…. I don’t know yet if I will make a quite long after story since it is already quite long itself (kurenai route).

It’s been quite long since the last time I’ve updated my site. March? ^^; I kinda feel I wrote more at tumblr lately.

East Tower – Kuon ←Click to jump to AppStore
*not that new but I haven’t announced this on this blog… so ^^; And the current process:

1. You can make the mc aggresive (seme) or passive(uke) depends on your choice.

2. There will be 2 big parts, the stage1~7 like what you know and the part where east tower run into chaos.

3. There are after story of other characters. (might be disposed if I have no time)

4. Some animals will appear and they might have big roles.

5. There will be more than 2 ending (normal and love)

6. Harem ending? (I’m still considering this but it might be hard to make)